Originally the Border Terrier was referred to as the Coquetdale Terrier or Redesdale Terrier from the area in which it evolved, but by the late 1800's it was generally known as the Border Terrier, probably because of its long history with the Border Hunt in Northumberland. It shares its ancestry with that of the Bedlington Terrier and the Dandie Dinmont Terrier. It was recognised as a breed by the Kennel Club in 1920, the same year the The Border Terrier Club was formed. 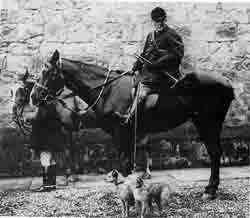 Picture left is William Weddell, earthstopper to the Percy Hunt in Northumberland. The photograph was taken around 1912. The Border Terriers are (left) Rap & Nailer. It is interesting to note that Rap (Weddell's) appears in many Border Terrier pedigrees.

The Border Terrier originates from the rough, and at times bleak, hill country which can be found in the areas which sit on both sides of the border between England and Scotland. This is sometimes known as 'The Border Country'. The breed was developed by the farmers and shepherds of the area, who used terriers to help contain the local fox population. Foxes were, and still are in The Border Country, a predatory animal of particular concern to sheep farmers whose flocks wander relatively free over many thousands of hectares of heath and heather covered land. In the 19th century when foxhunting developed into the sport we know today, the breed began to be used as part of the more formal foxhunting scene. 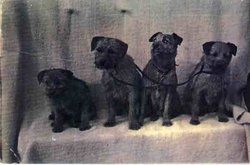 Its purpose was (and is) to 'bolt' foxes when they 'go to ground'. In other words when foxhounds and the field (horse-riders) in pursuit of the fox stop because the fox has gone into one of its underground lairs, the Border Terrier has to go underground and either 'bolt' (chase out) the fox or stay with it and bark. This is to indicate to those above ground where the fox is located so that they can dig down to their quarry. The Border should not be too forward in attacking the fox underground. Rather he should threaten him and preferably chase him out.
These activities, and the particular terrain in which they have to be conducted, dictate how the breed should look and behave as required by the official British Breed Standard. 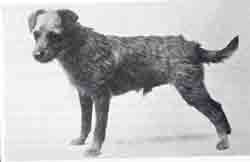 Pictured left, Miss Bell-Irvings "Tinker" the first Border Terrier to win a Challenge Certificate, although he won 3 CC's in total, sadly he never attained the title of Champion as two of the CC's were awarded by the same judge Mr T Lawrence. However, he was also an excellent worker and gained a Working Certificate with the the Dumfriesshire Otterhounds.

Almost all of the requirements in the Breed Standard are specifically chosen to make the breed able to do the job of work for which it has been designed.
For example the next words used in the standard are "Capable of following a horse, combining activity with gameness." Self-explanatory statements - but they also dictate the fact that the breed should be built for endurance and a certain amount of speed - but not for sprinting or excessive speed. "Capable of being spanned by both hands behind the shoulder" is another sentence in the breed standard and is there for a purpose. The Border Terrier should be able to go to ground and follow a fox into any space into which it could go. The foxes found in Border Country are not large and can get into fairly small spaces. Borders have to be able to do likewise. Yet another aspect of the breed dictated by its purpose, is that though it has to be 'game' underground, it must emphatically not be aggressive with other dogs. A trouble making Border that has to integrate with a pack of hounds would not last very long before the hounds put him in his place - or worse! 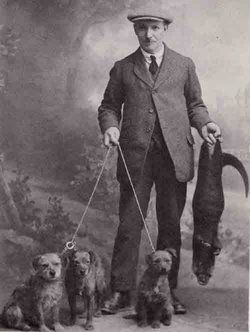 Pictured right is William Carruthers with his terriers around 1924. From left to right are Allen Piper, Jean Of Tynedale & Tally Ho.